In the Stacks with Barry & LaToya, was recorded during their time at the Twin Lakes Library System. The original show started in June 2010 and ran through June 2013. In October 2014 they recorded a Where Are They Now episode. The podcast was a loosely library-related series that gave a peek inside the not so hallowed walls of a public library system and provided commentary on various topics.
The show resumed in July 2019 and continues to showcase their viewpoints on news, entertainment, books, and more. 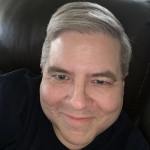 Barry, a popular New Pulp author, provides the information and often-times more philosophical viewpoints. He was with the Twin Lakes Library System from 1995 to 2014. He is a hockey fan and enjoys pulp fiction. In his free time, Barry enjoys writing and spending time with his son. He is an avid comic book reader and enjoys listening to British Pop, especially Robbie Williams.

LaToya, an administrative professional, is the comic relief. At the time, she was the youngest public library system Assistant Director in the state of Georgia. She was with the Twin Lakes Library System from 2001 to 2014. She is a huge Michael Bublé and Atlanta United fan who is an Apple fangirl and enjoys British television series and period pieces. In her free time, LaToya enjoys bingeing television shows, watching documentaries, organizing, and reading. She loves taking cruises, writing poetry, and spending time with her family.

He will nourish your intellectual interests while she provides entertainment gossip and commentary. In the Stacks with Barry & LaToya has a little something for everyone. If you have suggestions on show topics or even feedback, contact us!
DISCLAIMER: Opinions expressed on the show are entirely those of its participants and do not necessarily, or cannot be taken to represent the opinions, positions or views past, present, or future, of the Twin Lakes Library System.